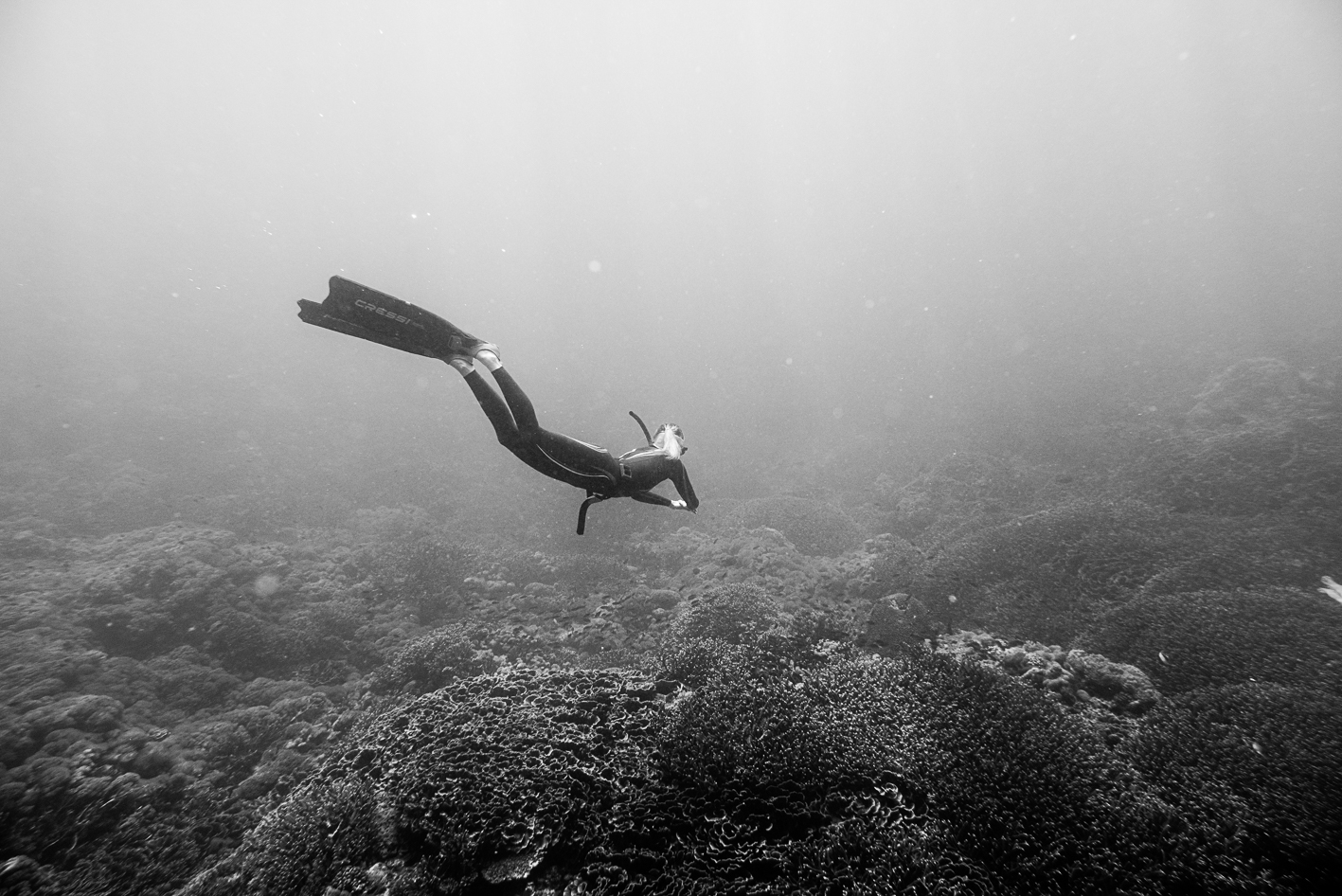 Eleanor Curtis freediving in the waters off Nusa Lembongan, March 2018, shortly after photographing the manta rays as printed in Into the Blue. Photography courtesy of Agustine Elejalde

Eleanor Curtis is a photographer based in London specialising in black and white negative photography and silver gelatin printing.

Eleanor started using a camera as a teenager and mastered the art of developing and printing her own black and white 35mm photography in the darkroom when she was 17 years old. Her ideas for photography were further enhanced when working as a Research Fellow at the Royal College of Art in the early 1990s. In the mid 1990s she left London and started work as a journalist and photographer working for a variety of UK, European and US broadsheets, journals and news agencies,  working from the Middle East, Italy and Africa between 1994 and 2001. Her list of publications included The Financial Times (Weekend), The Guardian, The Irish Times, Reuters (SA) and Agence France Presse. She had her first solo exhibition in London in 1999 on her documentary photographic work taken in Angola.

As an author she has four books on architecture and design and as a photographer she has published two books: St George’s Chapel, A Portrait (2008) and A Book of King’s (2010) which accompanied the colour work of Magnum photographer Martin Parr. She has enjoyed solo and group exhibitions since 1999 in London, the wider UK and abroad. Her photography has been featured in various journals such as Black and White Photography and The British Journal of Photography, and on the BBC and CNN news television.

She works primarily with black and white negative film using 35mm, 120mm and 5 x 4 negatives. Eleanor’s new work is focused on the human form and the behaviour of silk and net on skin and under the water. She has returned to using her medium format negative camera in the studio and is enjoying experimenting with a Nikonos V underwater 35mm camera.

Eleanor still works in the darkroom and has recently experimented with platinum/palladium printing and other alternate printing processes such as Van Dyke and Cyanotype. She is continuing to explore these traditional printing process as part of her new portfolio on the human form. She has also experimented with colour negative long exposure photography exclusively for the series ‘Love Is Talent’.

Eleanor works closely with a darkroom in central London where all her black and white images are printed as silver gelatin prints on fibre paper.

All prints are signed and are part of a limited edition of no more than 25.

2003 – 2004 MA (with Distinction) International and Comparative Law,  School of Oriental and African Studies, University of London